Or as the Danes say: Ukrudt forgår ikke så let

I have the luxury of a house with a garden, and in that garden I occasionally use Round-up. For those of you that do not know: Round-up is a notorious weed killer, with glyphosate as its main ingredient and developed and produced (mainly) by Monsanto.

Admittedly, I’m not a huge fan of Monsanto (or their competitors/colleagues DoW, BASF, Syngenta a.o.) but not because of the reasons quoted in the video above. Seriously, if aspartame would be toxic, why would food companies use it? Killing your customers is one certain way of losing your sales, and hence your profits. Companies may make decisions that are short-sighted, as all of us do, but they are not that short-sighted. The main reason I’m worried about these companies is their sheer size and market power, and the vested interests they may have in proving their own products to be safe.

The complete list can be found here. Now let me list a few examples of each category:

Group 2B: Lead; Perineal use of talc based body powder; Coffee; Occupational exposure as a fire fighter;

Group 4: Caprolactam (only one component was classified in group 4 thus far)

So if we would like to completely avoid all carcinogenic hazards, we should among others always stay inside (no sun allowed), quit drinking alcohol, and forbid people to become hair dressers and fire fighters. Oh, and the Dutch would have to give up their beloved snacks like kroketten and frikandellen because they are prepared indoors. Perhaps we should also close down the yellow M bars and their competitors the kings of burgers.

Obviously avoiding all carcinogenic hazards is impossible. But that was never the point of the IARC classification in the first place. The IARC classifies hazards, that is potential sources, but not the actual risk, because that depends on exposure as well as hazard. Or as the IARC puts it in their Q&A:

In fact a more recent meeting of the FAO/WHO judged that their is no carcinogenic risk of glyphosate from exposure through food. Does that mean that glyphosate is absolutely safe? No, because exposure through food is minimal, so we only get small doses. The meeting did not conclude anything about exposure through for example spraying, although it does seem not to have hurt American farmers who have used it. Then again, others did find associations between cancer and glyphosate spraying (see the IARC study).

So why use glyphosate in my garden? Well one has to consider the alternatives:

Glyphosate, although possibly carcinogenic, is actually a relatively benign weed killer because it breaks down in the soil. That, combined with the fact that I intended to use only a small amount, and the fact that glyphosate kills roots as well as foliage, made me opt for Round-up.

I think this post summarizes the main problems of some of the more vocal opponents of Round-up:

But hey: Weeds will persist, no matter how much Round-up or good science we throw at them… 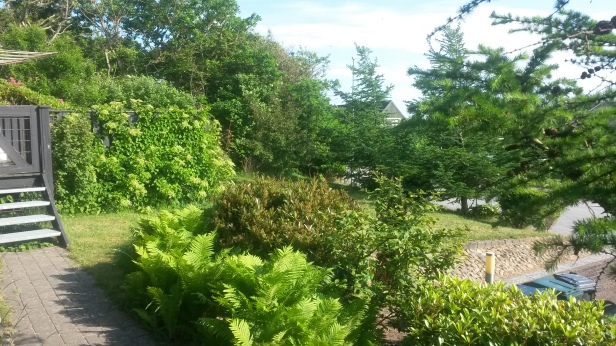 For completeness and avoidance of doubt: these are my personal opinions not (necessarily) those of my colleagues. Also I have been to conferences where Monsanto was one of the (many) sponsors and I publish on GMOs.

Photos from my garden.