Economics is sometimes portrayed as the dismal science. The phrase, attributed to Thomas Carlyle, is often thought to have originated to qualify Thomas Malthus’ work on population, although Carlyle may actually have used it in a different setting (according to Wikipedia).

Malthus’ work on population is still is well known these days, and although he has been proven wrong over the last two centuries (on average at least), the question whether he has been wrong in the long run is still debated. I know, “In the long run, we’re all dead,” to quote Keynes, but unless we’re talking about the very long run, even though I’m dead I may care about the future of my children and grandchildren. 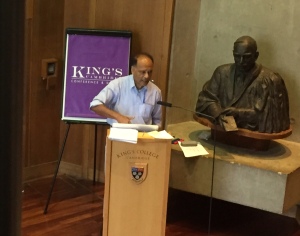 And this population was exactly the point that Sir Partha Dasgupta addressed in his keynote at the Bioecon network conference last week. It is quite possible that we’re overusing the earth’s carrying capacity just now, and even more so if we want everyone to have a decent life. The United Nations addresses family planning, he argued, mainly as a question of women’s rights, in the sense that the women should decide how many children they should have. Although a perfectly liberal standpoint, this ignores the fact that some preferences are socially embedded and most of us are conformists. So if all my neighbours have 5 children, so will I. The externality that we create in this way is one of overpopulation. How should we address that? That’s the uncomfortable part. The standard solution of economists to externalities is taxes, but I doubt that’s what we want here…. 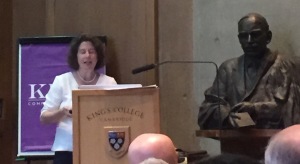 Similarly, Amy Ando in her keynote addressed among others the question: conservation of what and for whom? Two important questions for the conservation economists in the room, as most of us do often not explicitly think about these. We tend to take the conservation goal as given (elephants, species, a national park) and the for whom part is thought to be “the population in general.” If we account for differences between groups at all it’s often mainly on the basis of income, or a dummy variable for race. However, as Amy pointed out with an example from the US, the national parks are predominantly visited by white people. Of course that is partly due to income differences (the parks are hard to reach if you don’t have a car), but more might be going on. In fact, personally I’m sure that people do not value the same aspects of conservation, and hence require much different “types of conservation.”  Are we conserving the right things for the right people? How do we address that?  Again, an uncomfortable question for us. I think this is a part where economists have to look over the edge and talk more with other social sciences, sociologists and anthropologists etc. I hope they can give us some clues.

Oh, and it’s only fair that we get asked the uncomfortable questions this time. After all economists have been asking them for centuries…