Boscán, L., Kaiser, B. A., & Ravn-Jonsen, L. Beyond Wind: New Challenges to the Expansion of Renewables in Denmark. New Challenges and Solutions for Renewable Energy: Japan, East Asia and Northern Europe, 319.

Denmark is widely regarded as a world-class example in the transformation of energy systems and in the integration of variable renewable energy sources into electricity systems. Rightly so. Between 1972 and 2017, Denmark’s gross final renewable energy consumption went from 1,4% to 32,2% (Danish Energy Agency, 2017).

Wind power development is perhaps the most visible face of this success story, as Denmark’s wind production accounted for 43,4% of gross domestic electricity consumption in 2017 (Energinet) – a record that has been broken several times by Denmark itself in the past few years. In fact, it represents a 20-percentage point increase relative to the figure corresponding to 2007.

However, beyond wind, there are several less visible aspects, which are at the core of Denmark’s successful energy transformation. Energy planning, together with organized community participation, is one such element. The market and infrastructure integration with neighboring countries, which possess fuel and technology mixes that complement Denmark’s, is another important aspect. Similarly, the presence of natural resources, like oil and gas, which have been put at the service of sustainability and security of supply is also relevant. All these elements have made of Denmark a leader in other equally important areas other than wind, such as District Heating, which provides service to roughly two-thirds of Danish households using mostly renewable fuel sources.

While the present balance of achievements in Denmark’s renewable agenda is positive and the ambitions for the future are high, there are also significant challenges ahead.

First, the Danish transportation sector – road transportation, in particular – is anything but green. Between 1990 and 2016, its total fuel consumption has increased by 49%, together with an increase in CO2 emissions (20%) and GHG emissions (15%). This has happened in parallel to the drastic emission reduction of energy conversion sectors like electricity and heat generation. Despite the existence of a well-developed public transportation system, a taxation system that discourages inefficient vehicles and a strong cycling culture and several policies encouraging energy efficiency, Denmark lacks a coherent strategy for the decarbonization of its road transportation sector. In contrast to neighboring Norway, for example, Denmark has a very small Electric Vehicle (EV) fleet. While the Danish government has recently introduced a new set of policy proposals, including a ban on gasoline and diesel cars by 2030, the policies have so far been rather spasmodic. 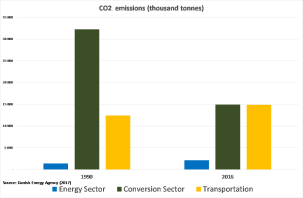 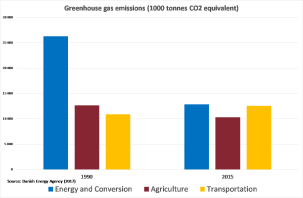 Second, while Danish District Heating is a remarkable example of the energy transformation the country has undergone – with more than 50% of renewables in its fuel mix – more than one-third of it fuel mix still is fossil-based. Moreover, biomass accounts for most of all renewables used by Danish District Heating companies. Not only Denmark is a net importer of biomass, which has impact on the country’s security of supply, but this fuel source is not entirely harmless to the environment. In parallel, the most recent energy policy agreement put forward by the Danish government proposes a “modernization” of District Heating. The set of reforms – gradually entering in force from 2019 onwards – relaxes the cogeneration and natural gas requirements traditionally imposed on district heating companies and allows heating customers to choose individual heating solutions over district heating. Simultaneously, the new policy agreement eliminates an existing subsidy on cogeneration plants and reduces taxation on electricity. All in all, the Danish government is betting on the electrification of the Danish heating sector, which is a reasonable strategy given that electricity generation is already based on renewables. Nonetheless, the set of measures may prove untimely and insufficient, and could backfire. Economically challenged district heating firms may dash for biomass, instead of electricity. Likewise, the overall district heating business model – which has been a cornerstone of the Danish energy transition – may be challenged by decentralized electric heating solutions, which may prove disadvantageous from an energy system planning perspective.

Third, Denmark is home to some of the highest retail electricity prices in Europe, standing above the average for most consumer categories. Taxation and surcharges, including the widely debated Public Service Obligation (PSO), which have financed the development of renewables – particularly wind power – are responsible for this. In the past decade (2007 – 2016), while Nordic wholesale electricity prices have declined, the PSO has increased by 12 percentage points. Although the PSO is being phased out, retail prices are still too high relative to decarbonize (transportation and heating) by means of electrification. This fact points to the increasing conflicts between Danish energy policy goals, which calls for a serious reconsideration of the existing taxation and financing frameworks underlying renewable energy development. 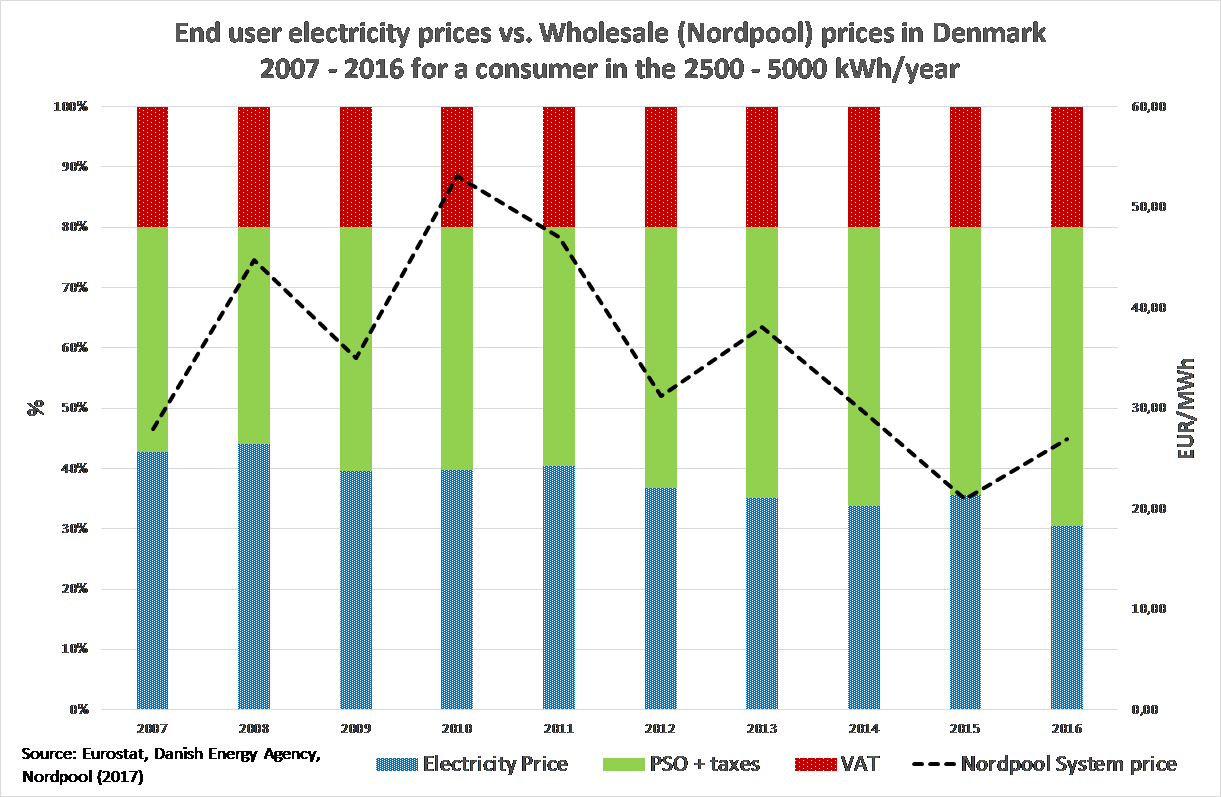 Fourth, even more wind power will be added to the Danish energy system. According to the most recent plans, three new offshore wind farms will be added by 2030, increasing the system balancing needs of Denmark. While interconnections have proven (and may well continue proving) to be paramount to addressing the balancing challenge, Denmark is increasingly relying on the production of its neighbors. At the same time, domestic thermal baseload production capacity is in jeopardy. Not only have there been few additions in the past years, the removal of subsidies may further compromise the economic viability of these plants. The further addition of wind power, together with declining wholesale electricity prices and the dwindling thermal capacity, may compromise Denmark’s security of supply.

In summary, Denmark must seriously rethink its renewable strategy towards the future and resolve some of the conflicts arising between conflicting policy instruments. While the bet on wind power has proven successful so far, a continued focus on this technology without an integrated approach to energy policymaking could prove risky for the future of the Danish energy transition.

Cover image credit: “Windmills at the windmill farm Middelgrunden” by andjohan is licensed under CC BY-SA 2.0

My Tweets
Join 169 other followers