Shipping paved the way for exploration and societal development, shaping the world, and it is rightfully considered to be the backbone of a globalised economy. Today, the most cost-effective transport method carries more than 80% of merchandise worldwide with a strong growth trajectory, naturally following global trade. To reach this “status”, over the centuries ships have relied on wind, human propulsion and coal power. Today most commercial ships are powered by heavy fuel oil (HFO). A tar-like residual by-product of crude oil refinery, HFO releases high amounts of air pollutants such as sulphur oxides (SOx), nitrous oxides (NOx) and particulate matter (PM), to name a few, when burned.

Short and prolonged exposure to air pollution from ships has been estimated to cause around 400,000 premature deaths and 14 million cases of childhood asthma annually.

Exhaust emissions of air pollutants have been addressed by the International Maritime Organisation (IMO) since 1997 under the International Convention for the Prevention of Pollution from Ships (MARPOL-Annex VI). From January 2020, the IMO will further reduce the allowed sulphur content of marine bunker fuel from 3.5% to 0.5% for emissions occurring outside Emissions Control Areas (ECAs). The limit within ECAs will remain at 0.10%, as set in 2015. The new sulphur cap is expected to result in both economic and health benefits, especially for port and coastal communities, as approximately 70% of the total shipping emissions occur within 400km of the shoreline (and especially while at berth).

Ship-owners and operators can meet the 2020 regulation through retrofitting existing vessels with exhaust gas scrubbers or by using an alternative fuel/propulsion method. The feasibility and cost-effectiveness of each technology are highly dependent on the vessel type (e.g. cruise ships, cargo ships, ferries), location, fuel prices and on the existing infrastructure along with the cost-effectiveness of building new one. When it comes to fuel alternatives, distillates (diesel), biofuels, low-sulphur HFO, hydrogen, ammonia and liquefied natural gas (LNG) are all currently under consideration by the sector. Despite expectations that most ships will switch to low-sulphur HFO and distillates (putting the strain on fuel suppliers and expectedly driving prices up), LNG in its own right is seen as the closest runner-up.

At first glance, LNG does indeed seem like a good alternative. It practically eliminates the targeted air pollutants (SOx close to 95-100%, PM over 95%, NOx over 80%) and it even emits between 5-35% less CO2 during combustion. It is a mature, flexible technology with growing infrastructure (LNG pipelines and LNG carrier ships are widely used to transport energy across the globe). The International Energy Agency (IEA) is projecting strong growth for LNG’s share in the total energy mix, which will continue to increase along natural gas, surpassing it in 2025.

LNG is cryogenically liquefied natural gas, stored at temperatures below -160°C. Comprised of >95% methane (CH4) it has one inherent drawback. If methane escapes into the atmosphere, it acts as a powerful greenhouse gas (GHG), which is around 87 times more potent than CO2 when taking a 20-year time-frame, and around 34 times more potent over 100 years. The science behind how to calculate the radiative forcing of methane compared to CO2 (the ability of methane to trap heat) is far from settled, but these are the values most commonly used, including by the IPCC. Furthermore, measuring the proprietary fugitive methane emissions occurring along the entire value chain is associated with high uncertainty despite continuous technical advancements, especially during the operation phase. Methane slip from incomplete combustion is practically eliminated in some engines. With positive methane assumption and use of best available technologies, LNG could indeed reduce overall GHG emissions, but only marginally so:

This raises the question of whether natural gas / LNG is indeed the green fuel that will support the transition to a 100% renewable economy. Moreover, a wide adoption of LNG will entail retrofitting existing vessels and building new ones. It will also require further bunkering infrastructure in ports and high capital investment in general. Even with generous infrastructure subsidies (such as those provided by the EU), local communities face the risk of stranded assets of what is ultimately a fossil fuel technology, with only marginal climate benefits at best. $500 million have already been invested in LNG bunkering infrastructure across Europe alone, with EU subsidies accounting for less than half. Future investments are projected to be well into the billions.

While the IMO has been focusing on limiting sulphur emissions, on a wider global scale the focus has been rather on reducing greenhouse gases, mainly CO2 . As agreed in the Paris Agreement signed in 2015, the world must achieve net zero emissions by 2050 in order to avoid the worst effects of climate change (climate catastrophe to put it bluntly). In its own right, shipping currently accounts for almost 3% of global CO2 emissions, with projections by the IMO published in 2014 forecasting a 250% increase by 2050. If left unregulated, this share could rise to 17% of global CO2 emissions. Factoring in this growing impact, the Kyoto Protocol to the UNFCCC signed in 1998, asked the IMO to develop a long-term GHGs strategy and de facto be solely responsible for addressing emissions from the sector. Since the majority of emissions occur in international waters, shipping (just like aviation), remained outside the Kyoto Protocol, as well as the Paris Agreement.

It took the IMO 20 years to finally rise to the occasion. In April 2018 at the IMO’s Marine Environment Protection Committee (MEPC) meeting (MEPC72), the first long-term GHG strategy was adopted. It calls for at least 50% sectoral CO2 reduction by 2050 and progressive carbon intensity reduction of 40% and 70% by 2030 and 2050 respectively (compared to 2008 levels). Previously, GHG emissions from ships were regulated only indirectly through energy efficiency standards. The strategy includes a set of short, medium and long terms measures, but none of them are currently binding; demonstrating a vision of full sectoral decarbonisation by the end of the century, rather than a set of enforceable regulations.

The 50% CO2 reduction target albeit missing the net-zero GHG global goal was seen as a major success back in April. A recent cost-benefit analysis however shows that due to the strong sectoral growth, operational carbon intensity should in fact reach 75-100% by mid-century. Previously proposed measures such as slow-steaming (reduced speed, which could potentially cut emissions with 1/3 alone) and increased energy efficiency will not be enough on their own. By 2030, zero-emissions ships should be entering the fleet. Furthermore, to reach the 50% target set by the IMO, CO2 reduction should commence as early as 2020. With an expected operational life of between 25-30 years for newly built ships and the arguably limited GHG emissions reduction of LNG, this further raises the question whether policy and sectoral support for LNG will not lead to stranded assets and limit technical innovation in cleaner technological alternatives.

At the World Maritime Forum held in October in Hong Kong (often referred to as the “Davos of shipping”), industry leaders supporting a strong decarbonisation pathway in the sector, including the Danish A.P. Møller Mærsk, sent a clear message that the transition could bring technological and business innovation to the sector, but it is only feasible at the needed rate if long-term global policies from the IMO are set in place. Perhaps demonstrating a more short-sighted and conservative approach, stakeholders from across the room raised their own concerns of the fast approaching 2020 sulphur cap and lobbied for a “deadline extension”. Thankful, the IMO did not hesitate to reconfirm that this is not up for negotiation. From January 2020, the 96% of the world fleet that is flagged under MARPOL – Annex IV countries will be expected to comply. If the implementation was to be delayed with 5 years, this could have resulted in as many as 570,000 additional premature deaths, according to IMO calculations from 2016.

During the long-anticipated (at least within the sector) MEPC73 meeting at the IMO HQ in London last week, there were high expectations for immediate short-term measures (pre-2023) to be implemented. In light of the IPCC special report on 1.5°C, discussed below, the spotlight was truly shining on the IMO to step up to the plate. Speed restrictions were among the considered measures, but this saw the room divided, with nations like Saudi Arabia and Brazil on the offense, arguing that energy efficiency measures are currently sufficient and any other proposed measured would not be cost-effective. Transport & Environment, a main industry news source, rightfully considers the talks at the IMO to have failed to yield any significant progress in terms of GHG reduction. Emphasizing the staggering “lack of urgency”, development of any pre-2023 measures as proposed at MEPC72 in April will now have to wait until May 2019 at the earliest. Despite an overall disappointing outcome, there are three main positive takeaways from the meeting that can give us a degree of consolation: 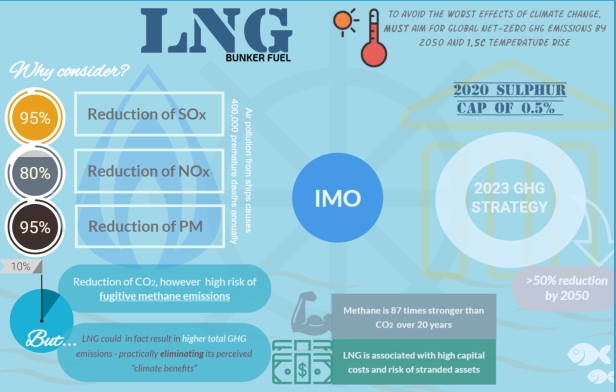 Keeping the above mentioned in mind, it is worth putting the maritime sector in the context of the long-awaited Special Report by the IPCC on keeping global temperature increases to 1.5°C (SR15), finally published in early October. The IPCC was requested to write this by the policymakers during the Paris proceeding in 2015 — this is worth mentioning as it is more often the case where scientists argue for their research and not vice-versa. The IPCC’s report has succeeded in sounding an alarm on the importance of urgently implementing fundamental and unprecedented transformation of all sectors, including shipping, and the need for joint coordinated action by all nation states. The report investigates the significantly reduced negative impact of global warming at 1.5°C, compared to the still considered ‘safe’ limit of 2°C (with high confidence), and the importance of reaching net zero emissions by 2050. Carbon Brief have made a fantastic interactive on the difference half a degree makes, which is worth exploring.

Having already experienced temperature increases by 1°C compared to pre-industrial levels, if we were to continue with business as usual (BAU), the global mean surface temperature is set to surpass 3°C by the end of the century. In regions like the Arctic, mean temperature rise has already reached 2-3°C. Carbon dioxide emissions must be reduced with 45% by 2030 compared to 2010 levels, reaching net-zero by 2050. Methane has to achieve at least a 35% reduction by 2050 even with the help of “negative emission technologies” (NETs). The report makes a further statement, which resonates quite strongly with the maritime sector standing at a crossroads:

According to the IPCC, fossil fuel investments made in the past and the coming few years will probably need to be retired before reaching the end of their operational life, and before the full return of the invested capital.

If we are to avoid catastrophic climate change, the IMO must urgently introduce, implement and enforce clear regulations on reducing GHGs from the sector, which are in line not only with the Paris Agreement but also with the scientific call for full sectoral “decarbonisation”. Placing a high bet on LNG will undoubtedly further fuel the sector’s inherent fossil addiction. Moreover, focusing on the advantages and “convenience” in the very short-term could ultimately prove incredibly costly, not only due to the capital directly invested but also the trillion dollar climate bill that will have to be paid. I dare not mention the human cost.

It is fair to say that the IMO and the maritime sector as a whole now have one of the hardest roles to play within the global climate agenda. This is partly due to the long overdue GHG strategy and the titanic public and private investment required in an industry that can be portrayed as a slow steaming cargo ship, which has gained strong momentum and does not respond to sudden policy or technological shifts. In an upcoming post, we will continue to explore this topic by shedding more light on the knotty interaction between the stakeholders involved.